NAME is pleased to announce the three awardees of the 2017 Anysia Drumheller Scholarship who will receive their 2017 Conference registration and 2018 membership dues paid for, along with some travel and lodging costs to attend the 15th Annual NAME Conference in Fort Lauderdale, Florida October 15-18, 2017.

To meet the awardees and to read more about the scholarship please click on the links below:

On June 28, 2017 the Washington Post printed a detailed article on the potential impack that the current Health Care Reform Bill could potentially have on our nation's public schools. 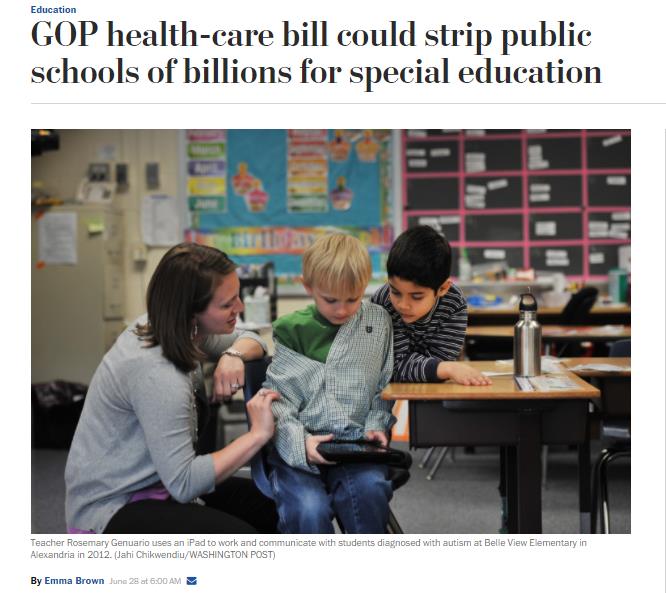 On June 22, 2017 the US Senate released its proposed Health Care Reform Bill.

It is important to note that this bill is very similar to the Health Care Reform Bill that was recently passed in the US House of Representatives.  The Save Medicaid in Schools Coalition is very concerned that these bills will have a significant negative effective on children’s health care services for a number of reasons including the proposed changes in Medicaid financing.

The Save Medicaid In Schools Coalition has sent a letter to the US House and Senate leadership expressing their concerns in regards to the proposed bills.  This letter can be found on the AASA, The Schools Superintendents Association website at:

Today (June 22, 2017) the Save Medicaid in Schools Coalition released the following on the Senate Health Care Reform Bill:

Also of interest is a link to the Larry Jacobs, Education Talk Radio interview on “The Relationship Of Schools and Medicaid”.  Participating in the call were John Hill, NAME Executive Director and Kathy Merry, NAME Region 2 LEA Representative.

If you have any questions please contact me at This email address is being protected from spambots. You need JavaScript enabled to view it.

Medicaid in Small Towns and Rural America: A Lifeline for Children, Families and Communities

Medicaid is a vital source of health coverage nationwide, but the program’s role is even more pronounced in small towns and rural areas. Medicaid covers a larger share of nonelderly adults and children in rural and small-town areas than in metropolitan areas; this trend is strongest among children.

Medicaid Helps Schools Help Children:  Medicaid’s role in schools goes beyond ensuring that students with disabilities have access to the medical services they need to succeed. Read more details in this April 2017 article from the Center on Budget and Policy Priorities.

NAME is sharing this American Association of School Administrators report regarding proposed Medicaid cuts. To read more and to access the report entitled: Cutting Medicaid:  A Prescription to Hurt the Neediest Kids, click here.

Additionally, click here  to view AASA’s infographic on “8 Facts about Kids on Medicaid and the Services They Receive in Schools.”

Changes are Likely Coming for School Based Medicaid

Based on proposed actions by the new administration and the 115th United States Congress, there will likely be changes to the Medicaid program that will potentially impact schools. As the only national organization specifically focused on Medicaid in schools, NAME is monitoring the situation closely. With the support of NAME’s Board of Directors, I have agreed to co-chair the 2017 Save Medicaid in Schools Coalition (SMISC).  Sasha Pudelski, Legislative Specialist, American Association of School Administrators and Kelly Vaillancourt Strobach, Director of Government Relations, National Association of School Psychologists are the other two co-chairs and are providing much needed leadership for this initiative. To date, approximately sixty national organizations have signed on to participate in the Save Medicaid in Schools Coalition.

The SMISC held an organizational meeting in the Rayburn House Office Building in Washington, D.C., on January 12, 2017. In addition to the Coalition members, several staff from the House of Representatives participated. The majority of the discussion at this first gathering focused on actions of potential concern for students who are served with funds generated via public health insurance programs:
•    Repeal of the Affordable Care Act
•    Medicaid Reform:
-Establishment of Block Grants/Per Capita Grants
-Elimination of the requirement that states include an Early and Periodic Screening, Diagnostic and Treatment (EPSDT) benefit
•    Changes to the Children’s Health Insurance Program (CHIP)

How each of these potential changes may be implemented remains to be seen. I am certain there will be lots of back and forth on actions that appear to be promising for children served via Medicaid, as well as those actions that appear to be concerning.  Currently on the promising side, the following article reports how a number of GOP Governors who did not participate in Medicaid expansion during the Obama administration are now requesting flexibility to expand their states’ Medicaid programs:
https://www.yahoo.com/news/gop-governors-turned-down-medicaid-091012213.html

The Coalition’s aim is to remind all involved that approximately half of the participants on Medicaid are children. Together, Medicaid and CHIP cover forty percent of all children in the United States.  Changes to these programs that negatively impact schools’ capacity to ensure students are healthy and ready to learn will ultimately compromise not only the well-being of our youngest and most vulnerable citizens, but also our country’s future prosperity.

If you have questions or information to share about what is happening at the local, state, or national level, please contact me.  You will also find updates about the SMISC Coalition and other news about school-based Medicaid on the NAME webpage at http://www.MedicaidForEducation.org.